Hokkai Bon Uta, formerly known as Beccho Bushi, was a vulgar coal miner’s song from Hokkaido. In 1940, the lyrics were subsequently rewritten. The song was rearranged into the version we eventually became familiar with today. The 1940 arrangement was recorded by Michiya Mihashi. The album sold 2.6 million copies. I’ve included a link to the Mihashi recording below.

There are a few reasons I chose to kick off these online taiko lessons with Hokkai Bon Uta.  First it’s one of the most popular Bon Odori songs, and you will hear the instrumental melody used as a motif throughout Japanese pop culture. Second, it’s simple to learn, yet a lot of fun to play. And finally, this melody of this song fits the basic Matsuri patterns perfectly. Therefore, if you’re even vaguely familiar with Matsuri, you have a great head start.

Minyo means “folk song” in Japanese. However, many Minyo songs were rearranged in the 20th century. For example, a composer might orchestrate a song. This makes the song better suited for contemporary instruments such as piano. Also, songs from a similar geographic area were combined. These measures were taken in order to made the songs more appealing. On the other hand, it’s hard to say these songs are purely “traditional.”

Similarly, in many areas of Japanese culture, the line between new and old is blurred. That is to say, culture evolves over time, and it changes. Thus, it’s hard to tell where tradition ends, and where creativity begins. Music isn’t the only place where this happens. Art, theatre, and architecture are just some of the other places you will see this in Japanese culture.

Personally, I think this is what makes Japan so interesting. For example, you can walk out of a shrine, and right into streets lined with cutting edge computers. You can take bullet train to a centuries-old castle. (But is it really centuries-old? Or instead just made to look that way?) But I digress. 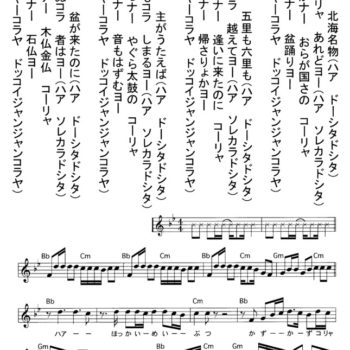 The waves like flower petals
We cross the Tsugaru Sea into Ezochi (Hokkaido)
At 17, she was just a bud
Now at 21, the flowers are in full bloom
In love yet completely unaware
A complete lack of interest (in the opposite sex) is no good either
There are many things Hokkaido is famous for
One is the Bon Odori of my land, Hokkaido 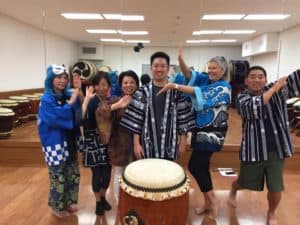