Learning How to Record Taiko Drums for Pop Music

Are you an engineer that wants to record taiko drums?  Are you a taiko drummer interested in collaborating with artists from other genres?  Or are you just a taiko nerd like me?  In this blog series, I’d like to share what I learned about recording taiko drums in a pop music context

The fact that you’re reading this means you and I are both taiko nerds.  You want to record taiko drums, and you probably play taiko too.  You, me and 0.0000001% of the global population share the same interest.  Certainly, we should get together and have coffee.  Or, if you’re in LA, please drop by my studio.

I wrote blog posts for each taiko drum cover.  In each article, I analyze what went wrong in the previous recording, and try to address it.  I did this for the performing, recording, and mixing process.  If you don’t want to read the full articles, you can scroll to the bottom of this page.  I posted a short summary of what I learned next to each video.

I picked 7 songs from a pretty wide range of music genres.  The first couple tries were pretty much trying to figure things out from a logistical and ergonomic perspective.  Once I had a setup I liked, I tried playing what “sounded natural.”  In other words, I tried playing something similar to what we’re used to hearing in the particular genre of music.

For some songs, I tried to get the Taiko to sound like an 808 hip-hop kit.  For others, I played closer to what a percussionist might do on a similar track.  Eventually, I came to the conclusion that I was “walking on eggshells” in a musical sense.  I was tip-toeing around, trying not to overstep my bounds in the music.  As a result, I really wasn’t adding anything unique.

This realization forced me to explore my own sound in a pop music context.  Over the course of recording the 7 covers, I was able to find a very rough blueprint of my sound.  It’s by no means complete, but I now have a starting point to playing almost any genre of pop music. 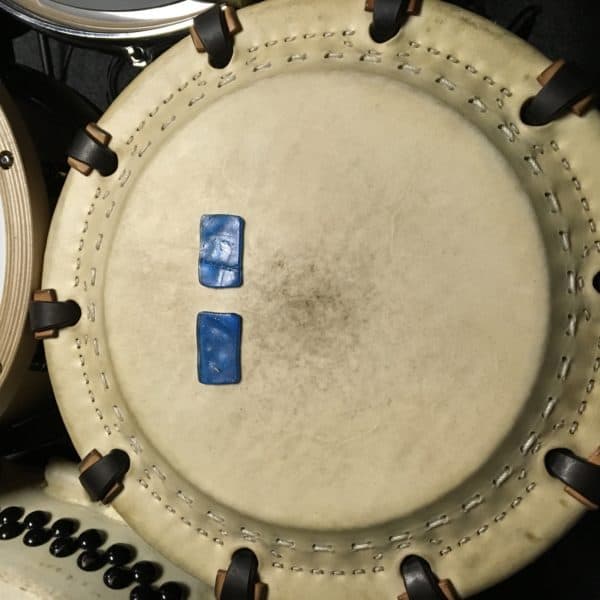 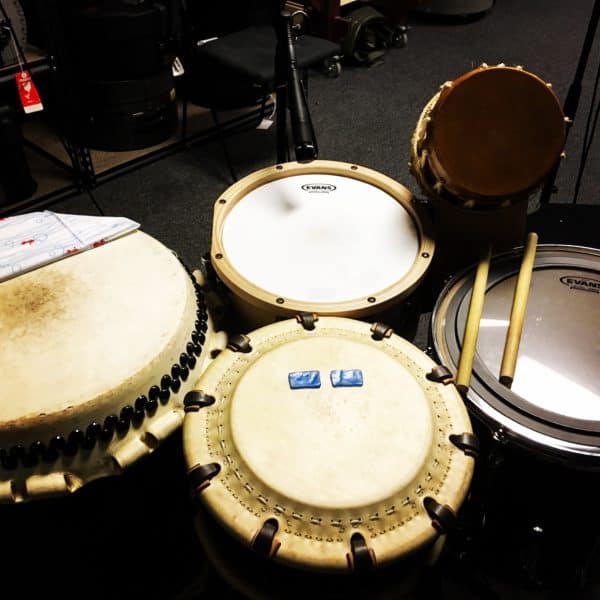 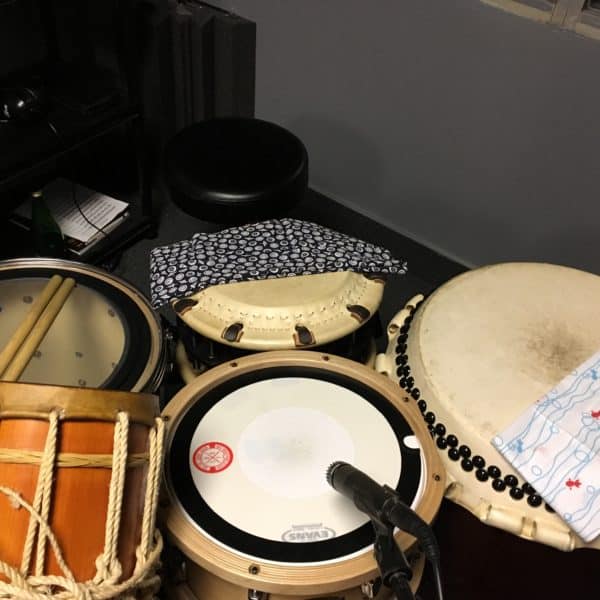 According to multiple articles, I’m supposed to record at a volume that’s “just loud enough and nowhere near clipping.”  Typically, that’s somewhere between -20db and -12db.  I read it on the internet so it must be true.  But rather than take my word for it, try listening to the drum covers for yourself.

Another challenge I faced in my particular situation was the recording environment.  My studio is by no means ideal for recording.  There’s an immense amount of noise and slapback.  I therefore tried two solutions.

First, I tried experimenting with several different mic placements and settings.  Second, I tried using different mixing techniques to get a sense of space without capturing too much noise.  Hopefully you can hear an improvement through the process. 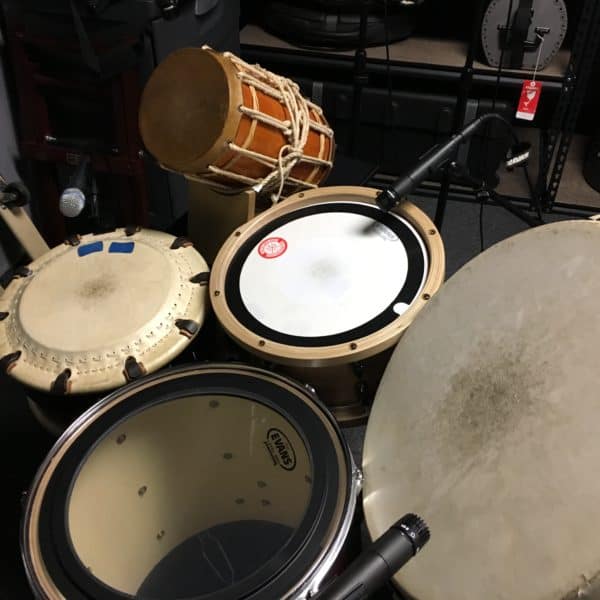 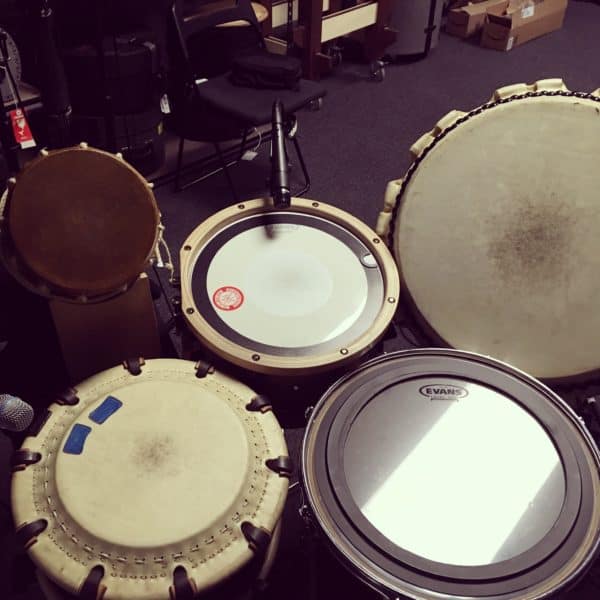 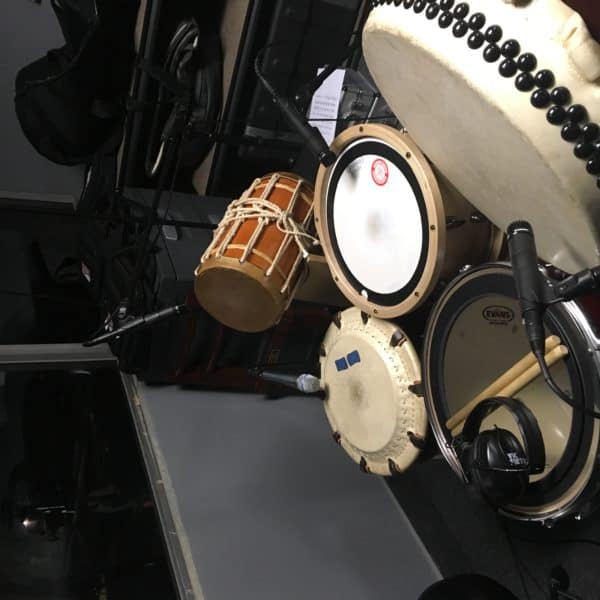 One of the first mixing challenges was the kick drum.  Certain genres of music have a very specific kick drum sound.  For example, the kick drum we’re used to hearing in hip-hop is very different from the kick drum in metal.  Molding the kick drum to match the genre of music was quite a fun challenge.

Another challenge was capturing a feeling of space.  As I mentioned before, my studio is by no means an ideal recording environment.  If I tried to capture the space in the recordings, you’re going to hear a lot of… trust me, you don’t want to hear it.

Since I couldn’t record the space of my studio, I needed to add it later on in the mix.  Hopefully you can hear the various iterations I tried throughout the 7 drum covers.  It’s not the perfect solution, but I was able to find somewhat of a workaround.

If you’re one of the 10 other people in the world that’s interested in learning how to record taiko drums, please contact me.  Let’s talk more about how to get the best recordings we can.

Learning How to Record Taiko Drums – List of Drum Covers

This was the first taiko drum covers I did for this series.  I’m still experimenting with the taiko setup, and my recording setup is incomplete.  Still lots of room for improvement, but the converted floor tom sounds pretty good as a kick.

Still not very comfortable with the set.  Tried experimenting with tea towels which did not produce the effect I wanted.  Playing is a bit too repetitive and not visually appealing.  Getting rid of the cymbals was a step in the right direction.

Finally settled on a pop kit setup.  Finally have comfortable access to all drums in the kit, and can mic them properly.  Full setup of 8 mics.  Shaker playing is so inconsistent.  Still need to work on making the playing more eye and ear catching.

Trying to give the taiko drums more of a presence in the arrangement.  In the previous recordings, the taiko acted as a substitute for a drum kit or percussion.  Kept the drums in the original recording, and performed more like a percussionist.

Higher Brothers “Made in China” (Hip-Hop)

Finally incorporated the Odaiko (courtesy of Joe Small) into the arrangement.  Having two totally different setups adds to the entertainment value from both a visual and sonic perspective.

Added the chudaiko into the arrangement.  I’ve hinted at Bon Daiko (Matsuri) patterns in previous videos, but this one is full-on.  This was probably the most popular drum cover of the series.

Finally, a tribute to Hiroshima to cap things off.  One of the first (if not the first) bands to successfully incorporate Japanese instruments into their music.